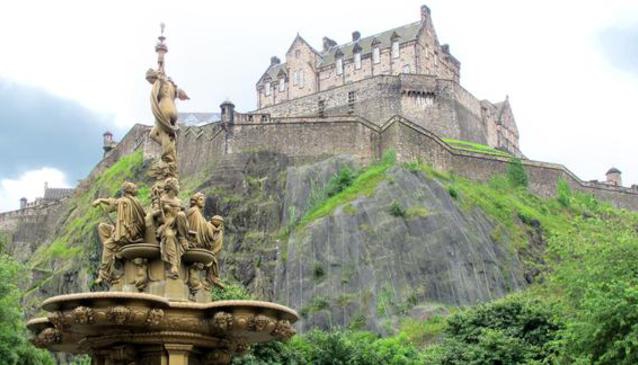 The centrepiece of the City of Edinburgh and its most iconic feature is, without doubt, Edinburgh Castle. Sat proudly on top of the castle rock, the menacing remains of an extinct volcano, the castle cuts an imposing figure on the skyline. The powerful presence is largely responsible for Edinburgh's magical and entirely unique setting that is sure to wow even the most disparaging of critics.

The castle is by no means the only reason to come here but it certainly does deserve much of the credit for Edinburgh's development into the great city it now is. It is thought that as early as the Iron Age, settlers struggled to uphold a fort in the same location. Surviving centuries of fighting over land and power, the castle went through several transformations whilst the city continued to built up around it. Much of the original architecture still exists today including Edinburgh's oldest surviving building, the 12th century St. Margaret's Chapel which can still be found in the castle grounds.

Other highlights of a visit to the castle include a visit to The Great Hall, a look at Scotland's Crown Jewels, The Stone of Destiny, The One O'Clock Gun and, of course, the stunning panoramic views of the city below. Audio guides and guided tours are available, or you may choose to take in the sights in your own time. Either way, it is worth allowing at least two hours for your visit in order to see all that is on offer.

This is the latest picture of Edinburgh Castle from the webcam at the top of Sheraton Hotel.