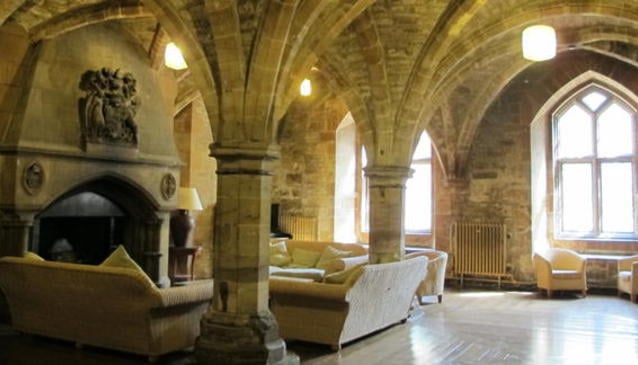 The College is set in 125 acres of beautiful parkland just outside Edinburgh and the historic 16th century building and peaceful surroundings make it a unique place to learn and study and to take stock and embark on new opportunities. When the 11th Marquis of Lothian generously gave this former Cistercian monastery to the people of Scotland, he wanted those who had never had an education to benefit and 70 years later, the College still operates with the same principles.

Over nine centuries of exciting history, Newbattle Abbey has only ever had three owners. The first of these were the Cistercian monks who founded the Abbey of Newbattle in 1140 during the reign of King David I. An abbey had been established at Melrose a few years earlier. When it became overcrowded, there was a need to establish a new abbey. A monk, called Ralph, was commissioned to find a convenient site. The Cistercian monks were inclined to settle on a low, secluded level, close to running water. A site within the parish of the ancient market town of Dalkeith suited the Cistercian requirements.

The Abbey was at the centre of a thriving commercial enterprise, which included coal mining, salt production (at Prestonpans) and sheep farming. Newbattle wool was exported throughout Europe and is supposed to have been the finest that merchants could buy. However, the proximity of the Abbey to Edinburgh meant that Newbattle suffered greatly in the Scottish wars with England. The English army burned it during the campaign of Richard II in 1385 and it was under attack again during the invasion of the Earl of Hertford in 1544 and again in 1548. There were twenty-four monks and an abbot in the community in 1528 but the numbers had decreased to about fifteen by the time of the Reformation.

The Lothian family dynasty was established when Mark Ker became lay Abbot of Newbattle Abbey in 1547. After the Reformation in 1560, Mark Ker rejected Catholicism and became a Protestant. As a reward he was given Newbattle Abbey and its vast estates. Down the centuries, members of the Lothian family forged distinguished careers in the church, diplomatic service, government and army. Mark Ker's son was given the title Earl of Lothian but a few generations on this was elevated to Marquess.

Over time, Newbattle Abbey has been remodelled many times. In 1836, the notable architect William Burn began to add an extra storey and servants wing. Development continued in the 1860s when David Bryce included a new family wing, which was followed by extra accommodation, including a new boudoir for Lady Lothian. The 9th Marquess of Lothian commissioned a further extension in 1886 to celebrate the visit of Queen Victoria. From the rediscovered Crypt, a consecrated Chapel was fashioned in 1893.