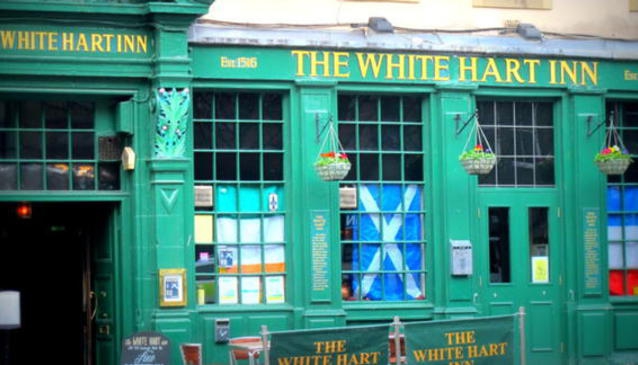 The White Hart is an Inn with a rich history and is close to where, legend has it, that King David I of Scotland was attacked by a White Hart in 1128. In the forest that once stood where the city of Edinburgh is now, The King was thrown from his horse and faced death. He put his hands out to defend himself from the next presumably fatal blow from the antlers, but clutched a cross which had materialised where the White Hart should have been. Soon after, an Inn was constructed near the area, and took the name from this story.

The Inn you can see today was constructed in 1740, but of the original Inn the cellar still survives and has seen patrons such as the poet Robert Burns and the infamous resurrection men, Burke and Hare. Perhaps these infamous patrons linger still, as the Inn-goers have repeatedly witnessed apparitions and the pub was voted as the most haunted in Edinburgh.

Most nights have live music, and a decent range of malt whiskies and real ales can be bought alongside meals of both the traditional Scottish and cosmopolitan variety.