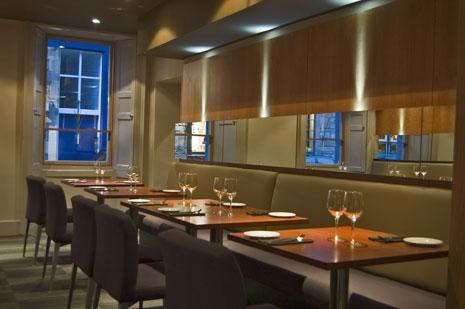 The area of Thistle Street upon which Iris is situated has become a culinary hotspot in Edinburgh. It certainly benefits from an enviable position in the heart of the city centre, and has been the home to some well-loved restaurants for quite some time now. Seafood, French, Mexican and Thai cuisines can all be found along this same stretch of road and a popular Chinese restaurant is also in close attendance. Iris however, is a step back towards more Scottish fare, with a touch of innovation and influence from Europe.

The restaurant itself is small and lends itself particularly well to small parties and intimate dinners for two. Arguably Iris’ target audience is the lunchtime crowd, with great value set-price deals for two and three courses which regularly fill the venue to capacity. Despite its size, Iris is not without atmosphere, and makes an informal yet fashionable setting by day or by night. In a similar vein, the menu, whilst fairly standard for a modern bistro, is served with sufficient style to elevate the restaurant into a higher tier of dining experience.

It is encouraging to see such a wealth of fish and seafood dishes on the menu and some interesting variations on traditional Scottish cuisine. Some of the starters, such as the fried squid and the scallops with iberic ham have a distinct Spanish feel about them, and other European themes crop up throughout, intertwined with locally-sourced produce. Prices are reasonable, although you will probably find that main courses need to be supplemented by some side orders which will bump the overall cost up. The wine also appears to be sensibly priced, but is limited to a succinct list.