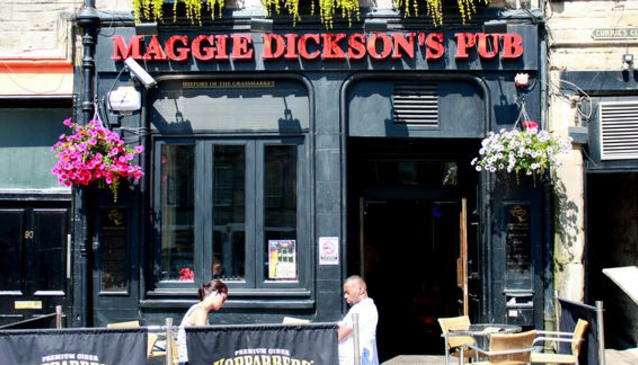 This Pub, named after the victim of the botched execution of fishwife Maggie Dickson. Executed in 1724 for concealing her pregnancy and abandoning her baby, medical students lost the body to her relatives in a bloody riot who took her to be buried. Whilst being transported to her final resting place, Maggie Dickson was found to be still alive. Nicknamed “Half Hangit” Maggie and freed having served her sentence, Maggie became a local celebrity and this pub was later named after her. Like nearby the White Hart Inn, this traditional Scottish bar has a history and legend to boot.

This small pub with dark wood panelling and exposed brick has a big atmosphere, gothic spooky decor and includes a skeleton in stocks. Lively at the weekends with students (including medical students who lost Maggie’s body four centuries ago) and locals, good pub grub and a fine range of Scotch whiskies. Occasional live rock music.