The Dark Past of Edinburgh's Grassmarket

Looking at the area now, it is difficult to believe that it was the scene of many public executions.

The Grassmarket lies to the south east of the Castle, nestled at the foot of the Castle Rock. Though now it is a prime area for pubs and cafes, it was traditionally where farmers would gather to trade goods and cattle. In fact, there was a weekly cattle market from 1472 until 1911. The livestock entered the market via the Cowgate (hence the name of the street).

Looking at the area now, it is difficult to believe that it was the scene of many public executions in the past. The site where people used to be hanged is commemorated by a set of dark paving stones which, on the pavement, form a shadow-like shape of the hangman’s scaffold known as “a gibbet”. Many of the pubs in the area are amongst the oldest in Edinburgh and some of their names refer to the bloody history of the Grassmarket - for example “The Last Drop”, where the condemned would have their last drink before they were dispatched. “Maggie Dickson’s” is named after a famous “hanging-gone-wrong”. Margaret Dickson was sentenced to death in 1728 for the crime of killing of an infant. She was hanged and her body was taken away for burial in Musselburgh. Halfway there, the corpse began to move and a successful attempt to revive her was made. Because she could not be tried and found guilty again for the same crime, she was free to live her life peacefully and lived to an old age. She was forever known as “half-hangit Maggie”. 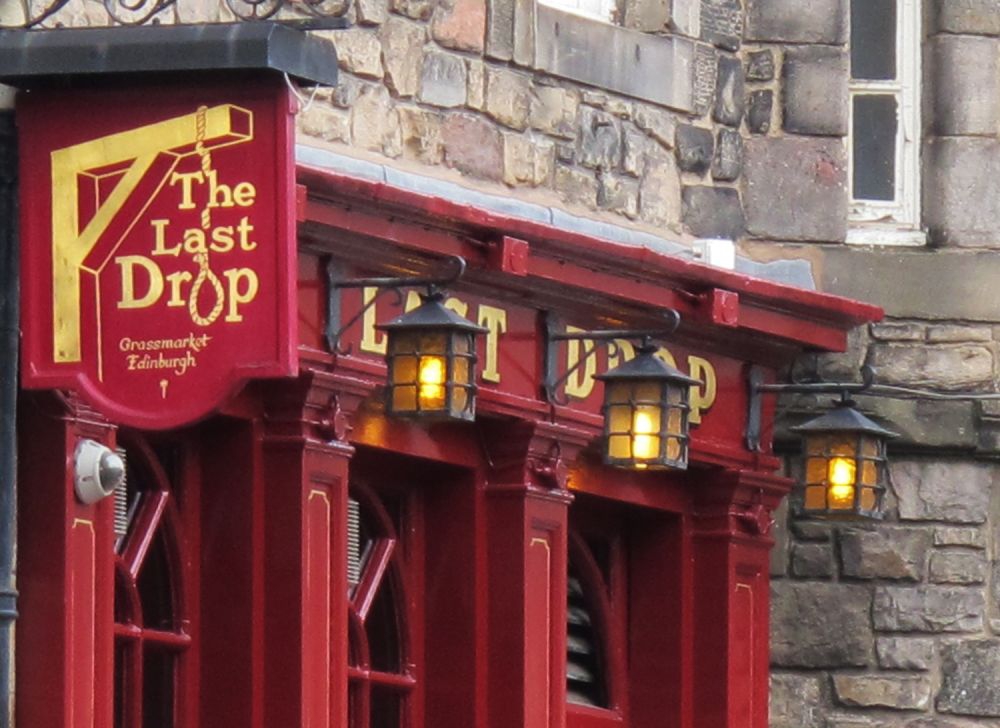 Several years later, in 1736, the Grassmarket was the scene of one of the most shocking incidents in the history of Edinburgh, “The Porteous Riots”. It began with the execution of a smuggler named Andrew Wilson, who had won public sympathy by helping another prisoner escape. A scuffle broke out in the crowd and Captain John Porteous, leader of the Town Guard, gave the order to open fire on the spectators. Six people died and many more were wounded. All hell broke loose and Porteous and his men were forced to retreat from the baying mob. Public opinion was that Porteous should be brought to justice for the killings and he was duly sentenced to hang. At the last minute, after petitioning Queen Anne, he was pardoned. This incensed the majority of those involved in this incident and a few of the ring leaders formed a lynch mob. Porteous was forcibly taken from his cell at the Tollbooth Prison and frog-marched down the West Bow (Victoria Street) to the Grassmarket. They paused on the way down to break into a shop for a rope, leaving a coin in payment. Captain Porteous was hanged from a dyer’s pole, just outside Hunter’s Close but before he could die, his body was cut down and given to the crowd to kick and abuse. He was eventually hanged again, this time for good. John Porteous lies buried in the nearby Greyfriars Kirkyard, his tombstone reads “All Passion Spent”. 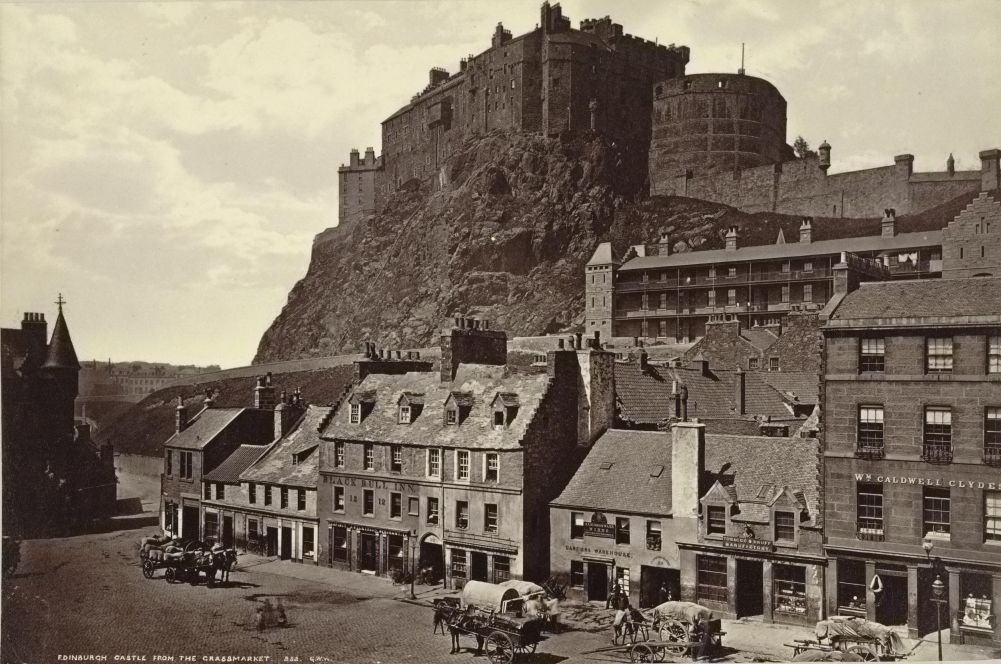 The notorious criminals, William Burke and William Hare, had lodgings on the West Port, just off the Grassmarket. In 1827 they were responsible for the deaths of 17 innocent people, who were killed for profit by selling their corpses for research to the anatomists at the University of Edinburgh. Many of the financial transactions between Burke and Hare and the anatomists took place in the White Hart Inn.

By the early 20th century, the Grassmarket had fallen into decline. With the end of the weekly cattle markets it became a haunt for drunks, prostitutes and the criminal underworld. This problem was made worse by the opening of many hostels for the homeless in and around the area. Even as recently as the 1970s it was a place to be avoided because of the anti-social behaviour of the methylated spirit drinkers. 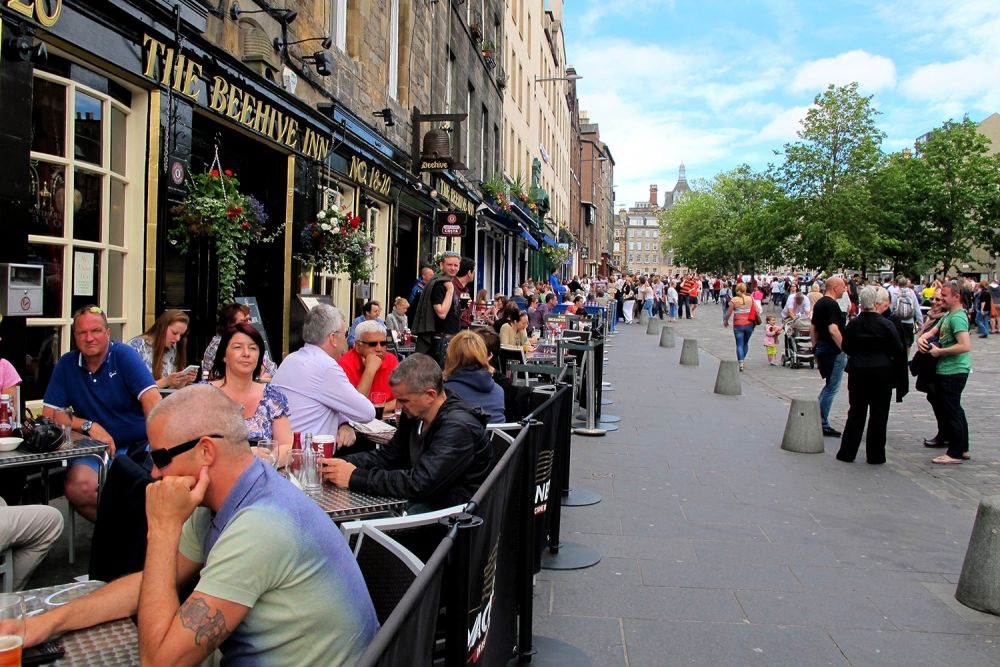 Happily, in the last 30 years or so, the fortunes of the Grassmarket have made a turn for the better with improvements such as the pedestrianisation of the area and the emergence of a café society. Now it is a vibrant and lively place enjoyed by tourists and locals alike. Home to many quirky, stylish and boutique shops, together with some of the best pubs in the city, the Grassmarket is certainly one of the top places to visit in Edinburgh, and a fine spot to sit and enjoy a dram or two.